THIS BLOCKBUSTER MOVIE IS TOO, TOO BLACK FOR FRANCE 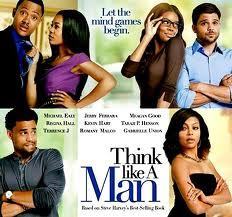 (google image)
Think Like A Man is an American movie, directed by Tom Story which earned over 80 million dollars in the US box offices this Spring. It is a movie based on a relationship book by the author Steve Harvey, titled, “Act Like a Lady, Think Like A Man”.

I read it a while ago. It’s a fun book which describes and analyses the complicated dance between men and women that takes place while trying to form healthy relationships with one another.

French movie distributors have refused to release it in France. The official reason is that: “La sortie de 'Think Like A Man' est annulée en France pour manque de diversité »

Yup, it is being blocked for French consumption due to lack of diversity.

What kind of diversity you ask?

Ethnic diversity, I am told.

Do I find this racist, you ask?

I’ll give you a case to make my point:

I have a dear friend who is Black American. She is married to a Frenchman who generally displays characteristics of normal intelligence, and surprising insight. Nevertheless, after a vacation to the US, I returned with a stack of magazines that I knew she was craving to read as they are generally difficult to find in France. Among this group of magazines were back issues of Essence Magazine, Ebony and Oprah’s magazine “O”.

Well, Mr. France, puffed up like a blow fish, turned beet red and exclaimed: Delorys, why are you bringing “P” (my friend) all these “blackie magazines”, then he slammed out the door.

I kid you not.

I almost fainted. I didn’t know whether to sh_t or go blind. I had never encountered anything like this before.

My friend calmed me down (that’s right, I was going to follow him out the door and give him a serious arse kicking if she weren’t going to do it herself) and said, “Don’ t take that outburst seriously, Delorys.”

“Girl,” she said laughing, “he’s just threatened. There are all these gorgeous and accomplished “Sisters” in these magazine doing amazing things. He’s just afraid I’ll get tired of this podunk town (in Provence), return to America to join the high- powered Sisters in these magazines.”

Let me tell you…that was another one of my many bizarre and frightening multi cultural moments.

Anyway, back to the distribution of the movie.

At the risk of sounding like a ‘60s radical from Berkeley, I have to say that

I find the decision to block the movie not racist but an act of protectionism.

Despite the fact that the larger society in the US has unrelentingly assaulted, criticized, brutally vivisected our black families and communities, attempting to inflict a pandemic of self hatred upon us, we actually still like each other and continue to attempt to negotiate healthy, heterosexual relationships.

A movie about a homogeneous group of people looking to unite could greatly confuse matters here in France considering the State of the European community at this moment.

I, for one (perhaps the only black one), empathise with the French distributor’s need to censor this all-black movie, with the” hottest- looking” black cast of the year. Hunks and Divas galore!

I can hardly wait until it comes out in DVD.