DIVVYING UP THE PEACE PRIZE MONEY 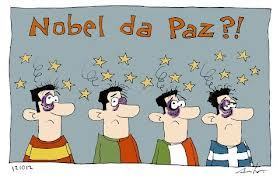 Bye bye for now!
Be the first to comment