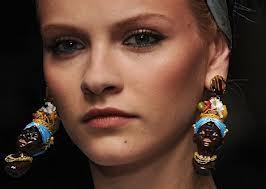 Word from America is that certain elements from Dolce Gabanna's Fall collection is racist!

Stephano Gabanna and Dominico Dolce
Dolce & Gabbana is an Italian luxury industry fashion house. It was established by Dominico Dolce and Stephano Gabbanna.in Venice). They met in Milano in 1980 and worked for the same fashion house. In 1982 they established a designer consulting studio which became“Dolce & Gabbana.They presented their first women’s collection in 1985 in Milan, where a year later their store would open in 1986.

Official word is that the "the boys" from D&G simply wanted to pay hommage to the first Africans to immigrate to Sicily!

I don't know...As for me, I would buy these earings in a New York minute!

I just can't afford them.
Be the first to comment