A Colossal Vacherie in Nice, France 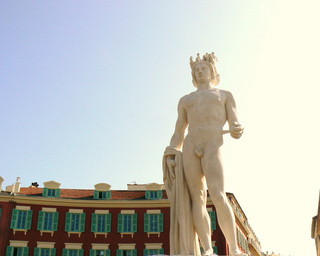 The most politically questionable sculptural installation project in Europe in the last decade has to be that of the completion of the Fountain du Soleil and the Sept Scultures Illuminées de Sept Continents. This monument to something not yet clear to me, now defines the Place Massena, which is in my opinion …the heart and Soul of the City of Nice.

Had I considered myself pudique I hardly would have settled in France…particularly Nice... but this most recent project has tested the limits of my comprehension.

At the centre of the Fontaine du Soleil… standing haughty and very, very, white (marble) in all of his “butt naked glory” at the entrance to the Old Town of Nice is Apollo!

All of you know him, I’m sure: the God…Greek God, I emphasize…of light and the sun, truth and prophecy, enlightenment medicine, healing, plague, music, poetry, arts, archery…everything… and I suppose our very existence as well.

He is the son of Zeus and Leto and twin brother of the “chaste “(ah…hem, look, I didn’t write this stuff. I wasn’t even born yet) huntress Artemis. Surrounding Him are five bronze statues of fabulously buffed naked men and a voluptuous broad or two...one toting a baby... accompanied by their animals. Allegedly, these Greco-Roman mythological folks represent the planets, Earth, Mars, Mercury and Saturn.

The inauguration took place on June 20th of this year (I happened to be in New York at the time and missed out on the “festivities”). Apollo is now back at his old location at the Place Massena after almost 40 years of censure.

It was rumoured that he was banned back in the 70s for being “overly well endowed”. This I find hard to believe because, in my opinion ( based on, of course, quite limited experience in these matters), he appears to me to be in completely perfect proportion throughout…if you get my drift.

But then what do I know? I’ve never been with a Greek!

So, after considerable controversy, Apollo was exiled to North Nice to the Sports Stadium, Parc des Sport Charles Ehrmann.

To my way of thinking, a sports stadium seems to be a far more appropriate place to reside, outside of perhaps as a centrepiece for a Gay Disco, for this particular Deity.

This Apollo now complements the contemporary art installation commissioned from the Catalan artist Jaume Plensa which frame the tracks of the Tramway.

Plensa’s towering seven white resin sculptures, which punctuate the square, are of naked men. These men are sitting on 10 meter high poles. Each man lights up the night with a play of light which bounces from one statue to the other signifying communications between the seven continents.

This interplay of light flashing reduces the Tramway to a dubious image of an ominous phallic image staking its way though core of Nissa La Bella.

I have been informed that the work is called “Conversations in Nice.”

It’s not the Apollo statue itself which perturbs me, it is the cumulative message of the entire centre city installation!

When a friend, appealing to my own personal sense of swagger bragged to me, years ago, how her Niçois population was rather “butch” I had no idea that this was what they were referring to.

Considering the sorry state of Greece today, it hardly seems fitting to have that kind of karma dominating the downtown area of a major French city!