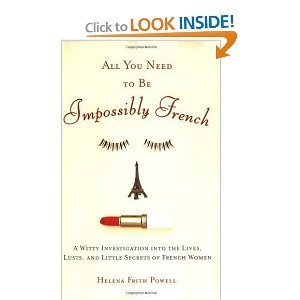 Not long ago, I was having lunch with some American women who happened to be married to or living with French men. They were exploring the reasons for the difficulties in developing friendships with French women.

Reasons explored ranged from “they tend to make their friends in elementary school» or “they are so busy with their raising their families and cooking gourmet meals for their men, or “they are not as liberated as American women…they close their eyes to their men’s affairs” to “I am so intimidated by those stylish French women and their chic, black ensembles.”

It made me reflect on the numerous books on the allure of French women published by Anglophones.

After indulging in a conversation and theories that went nowhere, we changed the subject, finished lunch after which I returned home to the comfy familiarity of my American husband.

Later that day, I looked up books on Amazon.fr to see whether French women extolled the feistiness, progressive and liberated openness… or anything else positive at all…about the American woman.

Nothing titled, “Unlock Your Inner American Woman”, “Those Lucky American Chicks Who Mostly Sleep Alone,” or even “The American Amazons of the Women’s Liberation Movement: What On Earth Is Their Secret?”.

(Perhaps some of you out there might be able to name a few for me). It simply appeared to me that here was no reciprocal interest between French and American women, regarding anything! Not even PMS.

Over the years I’ve met French women who expressed in subtle and diplomatic ways a curiosity of what the attraction American women had for their lifestyles…French cuisine and politesse, notwithstanding… and their men, in particular. It seemed to them that we, American women, had access to more wealth, comforts and gorgeous men of such diversity that it was globally enviable. Or so they said.

I kid you not!

It’s no wonder that thousands upon thousands of French women every year clandestinely flock to Greenwich (Village), San Francisco and Disney World in search of the American Woman’s secret allure and wonderful quality of life!

When a woman enters a foreign culture she instantly acquires the status of the women of that culture. Remember that.

On impact, I might look like a poacher, myself. However, my girly- girl posse, prior to marriage and for most of my life, actually, consisted of primarily members of the tribe among whom I eventually found my mate. It was inevitable that I would end up marrying one of the members of their family. I had been acculturated by the population of that particular tribe already and was quite familiar with the nuances of the male-female relationships within that tribe.

My advice to my American sisters: Do some serious research. Put romantic notions on the back burner...especially after your sweet sixteenth birthday. Read up on American foreign relations… think twice before poaching. It could prove hazardous to one's emotional, financial, social and spiritual well being.

Of course, that is unless one is a War or Mail Order Bride. Then that’s a whole ‘nother story…n’est-ce-pas?