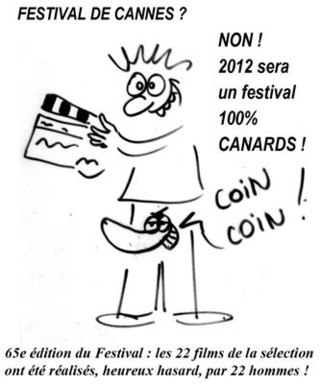 The feminist group La Barbe which started several years ago in response to the sexist media treatment of Segolene Royal in her race against Nicholas Sarkozy, has taken on one of the most sexist film establishments, the Cannes Film Festival for its exclusion of female directors from this year's competition. They are kind of like the Guerilla Girls in that they dress up in beards and as they say "crash high level meetings to protest male supremacy.")

This is my assessment of the situation:

In politics and sociology, divide and rule (derived from Latin divide et impera) also known as divide and conquer is a combination of political, military and economic strategy of gaining and maintaining power by breaking up larger concentrations of power into chunks that individually have less power than the one implementing the strategy. The concept refers to a strategy that breaks up existing power structures and prevents smaller power groups from linking up.

Elements of this technique involve:

Historically this strategy was used in many different ways by empires seeking to expand their territories.

As a Black American let me give you Mother Africa as an example:

The divide and conquer strategy was used by foreign countries in Africa during the colonial and post-colonial period.

Germany and Belgium ruled Rwanda and Burundi in a colonial capacity. Germany used the strategy of divide and conquer by placing members of the Tutsi minority in positions of power. When Belgium took over colonial rule in 1916, the Tutsi and Hutu groups were rearranged according to race instead of occupation. Belgium defined "Tutsi" as anyone with more than ten cows or a long nose, while "Hutu" meant someone with less than ten cows and a broad nose. The socioeconomic divide between Tutsis and Hutus continued after independence and was a major factor in the Rwandan Genocide.

During British rule of Nigeria from 1900 to 1960, different regions were frequently reclassified for administrative purposes. The conflict between the Igbo and Hausa made it easier for the British to consolidate their power in the region.


Where am I going with this you ask?

You see, my analysis of the Cannes film festival situation and the film industry in general is this: vperhaps if we women weren’t so bogged down in ideological wars between Lesbians and Straights, none of this kind of thing would be happening... on such an international level, no less!.

Talk to you later...