Should I Be Insulted? 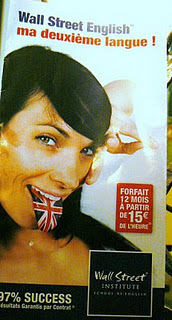 For years I noticed…all over Nice… on bill boards, buses and bus stop shelters, humungous ads for The Wall Street English Institutes.
Having no need to study something like this nor the desire to teach English, I continued to remain mildly curious without checking out what it was all about. Besides, here in Nice, the School was originally located at the Nice Etoile. The Etoile is not someplace I frequent often since I had already "o.d."-ed on Malls in the States and had no intention of taking up the habit here in France with all the fabulous specialty shops and boutiques in town that fullfil every need of a Francophile with international predilections like myself.

Well yesterday, I discovered that The Wall Street English School had relocated to a building on the rue de France. It also has a residence in what I call the English Countryside on avenue Guynemer, in Saint Laurent du Var. Since we were in the neighbourhood, I decided to stop in on the one in downtown Nice.

When I walked in, the exotic-looking young lady at the desk looked as if her Mom had entered ready to reprimand her for some disreputable act.

I introduced myself and then asked her to define "Wall Street English." Did it mean that they taught American English instead of British English? After all, last I remember Wall Street was located in lower Manhattan. In New York City. In the United States.

The young lady responded by saying, “Both, Madame”. And then she handed me this brochure:

Question: As an American, should I be insulted by this?

In addition, it is stated in the brochure that The Wall Street English Institute is recognized and approved by THE UNIVERSITY OF CAMBRIDGE!!!

It is an insult when you see that the Brits are bitting off of wall street, or do they now run wall street? Maybe that is way its so messed up.