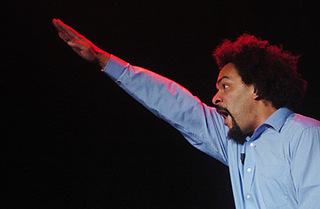 Dieudonné M'bala M'bala (born 11 February 1966), generally known simply as Dieudonné, is a French comedian, actor and political activist.
A word of advice to American Blacks in France. Don’t let Africans bait you with issues of racism in France. If you are an American and Black in France, confronted with this bait, I suggest you resist the temptation to discuss something we are entirely unqualified to discuss.
I suppose you’re wondering how it would be possible for a Black American living in France to be unqualified to discuss racism.
First we are not French. Nor are we from a former French colony. We are not looking for work or any support from a people who had colonized our African country. Our primary experience has been American Institutional racism which has continually evolved for over 500 years.
Obama, not withstanding.
According to the media and immigration patterns, Africa is riddled with ethnic strife. Racism! The kind of ethnic strife between blacks in Africa has resulted in huge numbers of Africans from various tribes fleeing to every continent on the globe.
Why would Europeans who have had to relinquish their African colonies want to deal with the same people, now in Europe, who threw them out? What kind of ethnocentric arrogance would demand that European tribes be less racist than any African tribe?
Despite the fact that from the very beginning American blacks’, who were imports from various African societies, purpose was to help build a brand new country for Caucasian people at the expense of Native Americans, we have never been considered Americans” We are simply a kind over ever-present reminder of Caucasian moral transgressions, in every way from the diverse characters of our features due to miscegenation, to the fact that we can actually survive all manner of insult and condescension, with a pride and flair which elicits envy, respect and admiration throughout the world.
No African in Europe has had to deal with the systematic racism that has tortured black Americans for over a half a century. They never sat on the back of the bus in Europe unless they wanted to.
On the other hand, black Americans, produced and harvested the nation’s produce, built the cities, nurtured the children and handled all the dirty work of the nation with minimal rewards. We faced fire hoses, lynchings, police dogs at voting booths and lunch counters in our very own country.
It has only taken a few decades for France to confront its own racism, America is still tackling ours.
And don’t get all excited about a post racial America, simply because we elected Obama. Obama is an African American. The majority of Americans who chose to elect Obama reminds me of something my Grandparents and Parents told me. You see, back in the days of Jim Crow laws which didn’t allow blacks in restaurants and hotels among other places, it was a well known fact that if a black donned African or Middle Eastern garb, they would be welcomed into the same establishments in which black Americans would be refused.
Chew on that for a while.
It appears to me, with the rate that France is confronting its racism, she will probably elect a black French President long before America elects an indigenous black one!