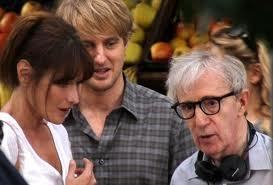 Woody Allen and Cast Members
While in New York we decided to see “ The Woodster’s “ latest movie, Midnight in Paris at the Lincoln Square Cinema, on the Upper West Side. The devastatingly gorgeous opening scenes of Paris actually seem to reveal that his love for the physical beauty of Paris equals his love of the physical attributes of New York City. Yet, it is obvious that he finds more depth, passion and complexity in the lives of contemporary New Yorkers than what he finds in contemporary Paris. In fact, the cumulative message of this movie seems to imply that nothing, new, inventive or creative of any importance has happened in Paris since the departure of America’s “lost generation” of artists, musicians and writers, before World War II. That we, Americans, “pistonned” the artistic and social life of 2Oth century Paris.

The meek and vapid cameo appearance of President Sarkowzy’s wife suggests that French women play, in his opinion, insignificant roles in the overall evolution of French culture and daily life.

I found it to be a disturbing movie showing that despite the innovative contributions American artists have made to Paris, that there is nothing left for us there but romantic notions of fantasies from the past.

“The Woodster” has obvious spent some time analysing the great cites of Europe. After seeing Barcelona, it appears that he doesn’t think much of the Spanish artists, or much of the American women who get mixed up with them. And as far as his movies that take place in England, he seems to feel that the Englishare weird, pompous and get away with murder.

All in all…it really doesn’t matter what he portrays…I’ll always be a fan of Woody Allan movies. His clarinet playing isn’t all that bad, either.