What On Earth Are They Talking About? 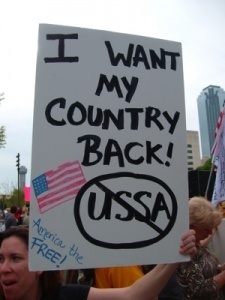 As a long-time expat in France, I need to pose several unanswered questions which have been causing me some sleepless nights, lately:

4) Who are they talking about?

5) When I read that some other groups are demanding that they get their country back, who exactly is demanding this? People who are victims of our previous foreign relations? Reluctant immigrants and other refugees perhaps?

6) Who are they talking about?

I would appreciate the feedback, since it is probably apparent to you that I have become completely out of touch.

School me on this one people!

(Post script :. I have just been informed that America does not actually have an official language. “ English is the de facto national language of the United States, with 82% of the population claiming it as a mother tongue, and some 96% claiming to speak it “well” or “very well”.[3] However, no official language exists at the Federal level. There have been several proposals to make English the national language in amendments to immigration reform bills,[4][5] but none of these bills has become law with the amendment intact.” Wikipedia

People…help me on this one as well…