A Logical Sequence of Events 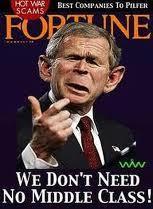 (google image)
Recently I received a letter from a male friend in response to a blog I wrote concerning the precarious situation in regard to the precarious state of the European Union. My friend, a native New Yorker, is an educator, activist and Fulbright scholar and has for decades lived on the West Coast. Here is an excerpt from his correspondence:

“I'm not sure what steps concealed the deconstruction of the middle class in Europe, if there has been such a deconstruction; but I know this one for the US. First we added a second working adult to the definition of middle class - so that two incomes were needed to produce the lifestyle previously accomplished with one. Then we offset flattened salaries with housing inflation so that the middle class could maintain once again the same lifestyle by borrowing off of its housing. And we lowered the costs of most everyday products by having them made in places where people earn only a couple of bucks a day for their labor. All the time, the share of the assets owned by those at the top, whose tax burden we steadily reduced to the point of starving government.”

This is my response:

When I was growing up in a moderately middle class black American family in New York City, my parents and their peers lived with a particular philosophy.

Although, both of my parents worked, my mother remained a homemaker until the last of her children reached school age. There were three of us. Their philosophy was that in a family, the role of the father’s income was to determine the standard of living in a family; the wife’s income would contribute to the quality of life. You see, this way, if one were to loose his/her job, the other could be able to kick for the duration, with minimum and workable adjustments in its day-to -day standard of living requirements.

In addition, the philosophy was that a family should never purchase a home where both full salaries would be required in order to qualify for a mortgage. This would often mean that one have to live in Brooklyn instead of Manhattan, Stanford, instead of Greenwich, Pasadena instead of Beverly Hills, Oakland instead of Sausalito, if you understand my meaning. This way, one wouldn’t accumulate unnecessary overhead, thus limiting the economical mobility of the family which the mother’s additional income could provide. The mother’s income was to be used primarily for quality of life issues such as planning for higher education for the children and also for the cultural enrichment of their intellectual and spiritual growth.

My family’s philosophy evolved in a culture… a black American culture… where historically both the female and the male worked outside the home for its survival. (Of course, I realize that I’m talking basically about my own family and their peers, not the general American community, black, white or other.)

When the American ethnic majority, through their women’s coercive tactics, reluctantly gave into their demands for the right to work for economic compensation, no theory was put in place as to how this would work in order to maintain the financial equilibrium of a family unit.

A backlash then ensued which granted women unequal, inferior, pay for equal work and at the same time required that in order to achieve a decent standard of living it would be necessary to find access to more than one paycheck for each housing unit, in most areas of the United States..