The Chic of French Women?!? 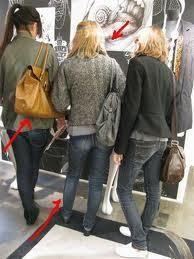 Ask any French Woman and she will most likely tell you that of all the world’s women, Italian (ie: Sophia Loren) and Black American (ie: Tina Turner) women are the most chic and age the most gracefully. I can attest to this having lived in France for over a decade.

In my personal opinion, no one cuts the air as elegantly as our confident, successful American Women in all our ethnic diversity. Just take another look at this roster of American women of “ a certain age” who all have that certain je ne sais quoi: Faye Dunaway; Jane Fonda; Angela Bassett, Rita Moreno, Cicely Tyson, Dionne Warwick, Connie Chung, Barbara Streisand and the late great Lena Horne.

Every time I read or hear about the « chicness » of French women, I assume that the person commenting had never been to America and simply looked around.

When I find that the individual is in fact, American, I assume a blind person is speaking and has been completely dependant on the descriptions given to him or her by French fashion designers or French cosmetics manufacturers.

It seems that all a French woman has to do is don a black tea shirt wrap some sort of scarf around her neck, and American women swoon and then "dumb down" their wardrobes. Some even run off and write entire books around the Gallic female icon of fashion and sophistication.

I suppose the French Chamber of Commerce appreciates the American publishing industry’s contributions to their coffers.

At what point did American women loose their pride and their appreciation for their own taste and fashion ingenuity?

To tell you the truth, for the most part, if I'm not wearing jeans, or mourners black, I feel “over dressed” …so to speak…living in France.