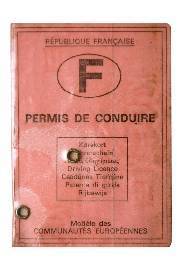 The tourist season has officially begun here on the French Riviera. What always arrives with the hordes is the inevitable and harsh criticism of French driving habits.

I’d like to intercept a bit with this blog before the Anglophones really start getting flagrant down here!

Everyone knows that anyone’s life can be irrevocably destroyed by an intoxicated or mentally disturbed driver on the road in any country by a driver of any nationality. My question is why have the French, in particular, been given such a bad rap as drivers?

I have been recipient many times of French driving hospitality. What I have found is that my French friends and acquaintances have displayed skill and grace at ever turn…so to speak. It’s no wonder, I later learned, considering what they have to go though in order to earn the privilege to drive in their country.

How may of you who have criticized the French actually studied for the French Permis de Conduire?

And I’m willing to bet…too broke!

Than means you don’t know bupkis about anything French.

Want to know how I came to this conclusion? Because it is expensive, difficult and studying for it would actually result in an evolution of thinking that would cause you to realise that you had no prior knowledge of what it takes to understand of the Gallic approach to manoeuvring safely through life in France. My philosophy is in order to criticize the French you should have been educated in France and taught by the French. How else can one understand the cultural nuances of a country which has the power to seduce millions of people through its doors, whether they be rich or poor, yellow green or blue, to a place which is probably the most complicated in all of Europe? Even people from rich and powerful countries are willing to test their fate in a country which for years will render them functional illiterates!

Years ago I took the driving school plunge…so I know of what I write.

I can’t overstate the fact that the pursuit of the French Permis de Conduire is an expensive, lengthy but profoundly informative study of the psychology of the French population. Believe me, studying this will enhance one’s relationships with the French people you encounter, do business with or with whom one becomes intimately involved. It will even enable one to distinguish a foreign driver from a French one.

One sunny afternoon, a fellow student, who is also an American, and I left another gruelling session of La Code de la Route to stop at a corner café. As we approached the curb, a car came screeching towards us in a completely misguided attempt to park in a no parking zone.

Mr. America, hisses, ., “Look at that. After they get their permits, all rules fly out the window. How typically French!


My response was, “What makes you think the driver is French?”

He pointed to the French License plate on the Italian Fiat, and said, “Look… 06 (the code for the Alpes Maritimes)!”

As if on cue, two men emerge from the car, sharing a typically boisterous conversation in Italian!

So, this is the advice from yours truly…the Expat Curmudgeon Writer on the Côte d’Azur…to American drivers in France. Stop criticizing…stay alert and either take your bigotry and pack it in your little back packs and go back home… or just get off the road and take the friggin’n bus!

Funny! I never noticed anything strange about French drivers when I lived in France. In fact, I thought they were good drivers and courteous people all around (despite the rep). Although I've thought about taking driver's tests when I was in Europe. The book of rules alone intimidated me!