Graffiti in Monaco? Yo Man...That's Whack! 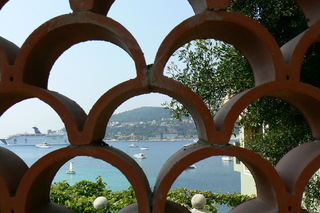 L'Art du Graffitti, Monaco
***Whack: an event, action, or thing which makes no sense or is contrary to a logical course of action; something entirely disagreable or undesirable; A non-sequitor;

Okay...enough. Since I'm closer to the Woodstock Generation than the Hip Hop, allow me to step out of someone else's generational lingo and tell you about my relationship with Grafitti.

Let me tell you that back in the early eighties, Graffiti saved my bacon!


Three weeks before the inauguration of my gallery..the first to specialize in the artwork created by children... two of my artists got "cold feet" and cancelled. There was major press coverage planned, a vernissage (gallery opening party), the invitations (fortunately) were still sitting on my desk and I was faced with 20' X 20' of blank wall space!

***Bummer: A situation in which no desireable result can occur.

The phone rings and a teacher from a prestigious arts high school was asking me if I would consider one of their students for a future show at my gallery.

The next morning, in walks a cute dark-eyed Hispanic kid, clad in ***Girbauds and ***Reeboks, accompanied by his ***homie.

***Girbauds: Jeans that anybody can wear but mostly black people. (Girbaud has straps on it that says M+FG. M+FG is a name that stands for Marthé et François. Most of the girbauds r sold in the city. "The best f_cking pants or shorts you can have. Also apparently the most expensive too. The real ones have straps on both legs: 1 on each side for shorts and 2 on each side for pants. On the straps, the real ones, it says M+FGIRBAUD and it keeps saying that. If your sh_t says Girbaud in cursive your sh_t is fake. They can come in different colors for the pants and straps. And some stupid ass ni_gas be spelling them all wrong and sh_t cuz it's that's French sh_t." )

***Reeboks: Gangster shoes to wear with your girbauds.

***Homie: Shortened version of homeboy, homeboy being your close friend.
ie: Friends ask you to write down your number. Homies have you on speed dial

The artist sat down and with dramatic flourish placed a small ***Black Book on my desk. I looked from my vacant 20' X 20' wall to the relatively teensy tiny black book and silently freaked out! You see, I had no idea of the signicance of this small black book, having not yet been introduced to what had come to be called the ***Hip Hop Cutlure.

The three of of stared at one another in silence. A real....long... transgenerational moment...let me tell you.

Realizing that yours truly was absoultely clueless as I looked through the intriguing extra-terrestrial-looking sketches, the author of the black book and his homie gave me a history lesson on the Grafitti movement and the urban Hip Hop Culture.


Until that day, the only impression I had of grafitti was an often vaguely annoying presence of various ***tag names on subway cars passing by in ever increasing frequency.

Tag: a personal signature, usually vandalism with spraypaint, but can be any graffiti.

This was different. Reminiscent of ***Diego Rivera and Expressionism!

"Don't look scared Ms. T" he said, laughing as my eyes again looked again from the teensy tiny black book to the naked wall space. "These are just sketches of what I have in my studio."

Then the author promised to deliver to my gallery the following day 3 of his huge, powerful graffiti pieces on stretched linen canvases!


He delivered the pieces and I sent out the newly designed invitations.

To make a long story short...as they say...I opened this inaugural show which featured this 17-year old Graffiti artist from the Bronx. Not only was it a major media event but this artist received a large commission to paint a mural in Queens.

I and many others agreed that the show was ***Fresh!


Intrigued by the popularity of this art form, I exhibited a number of other Grafitti artists. During this period, due to the success of the gallery and the influence of the Hip Hop culture, I ironically discovered the South of France, and eventually moved here.

And as they say... the rest is history.

Walking through this exhibit in Monaco remindend me that Grafitti not only saved my bacon, it actually, in its own way, altered the course of my life.