I Was Running Late 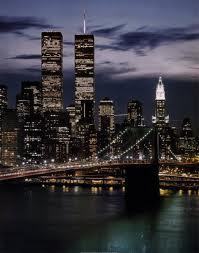 google image
I realize that this is October 11th…an entire month after most have posted their remembrance of 9/11. Finally here is mine.


So sorry about running late!

We had already been living in France, in Villefranche Sur Mer, for over two years on that fateful day when we were running late for an appointment in Nice.

My husband called me into our Den, pointed to the TV screen and said, “Look at this! What do you think of this?”


We both stared… horrified… at the image of a blazing tower of the World Trade Center. The news announcer had said that a plane had flown into the building.

Realizing that, as native New Yorkers, many of our friends and relatives were still living in the New York City Metropolitan area and that it appeared that they were now under attack, we looked at one another…speechless…and frightened in a manner we had never experienced in our entire adult life.

“Perhaps those N.Y.U. film students are up to their old shenanigans again…seizing the TV stations...or something...,” I quipped, in a misguided attempt at adding levity to our state of confusion..

What one earth was going on?

Should we call home?

We did. All the lines were busy.

We were running late for our appointment in Nice.

We turned off the TV got in our car and immediately turned on the news on Riviera Radio, just in time too hear the announcer state quite flatly that ‘the Twin Towers were no more!”

That massive structure… the Titanic of Manhattan (I had prophetically called it for years), could not possibly be gone! Transforming from a flaming inferno of death and destruction... to now toxic rubble. After all, we had just had brunch with friends at, Windows on the World, a couple of years earlier for my birthday!

Those film school students should be flogged, I thought again, just not wanting to believe.

We went though the rest of the day, after our appointment, running errands and buying newspapers. Not a single person we encountered in our local French Riviera towns seemed to us to have heard or read anything, despite the screaming headlines. Not one person broached the subject. Not a twit or tweet…so to speak.

Anyway when we finally got through to various friends and relatives in New York City, over the next few days, this is what we heard:

“I was running late, I turned on the TV to see that a second plane had already flown into the World Trade Center building. I realized I would not be going to work!”

“I was running late. My view from Jersey faces lower Manhattan. When I looked out my window, I saw smoke. I put on my binoculars to see what was happening. There was no way I was going to work that day!”


“My husband and I were running late on the Long Island Railroad. When we arrived at Grand Central there was pandemonium. Everyone screaming about a terrorist attack in lower Manhattan. I realized, then that I had no physical courage.”

“I was running late. When I arrived at the lobby of my apartment building, my Doorman said that there had been an attack on the World Trade building. Obviously I wasn’t exacting going to go to work. All I know is that I better get paid!”


"I was running late to my job at the World Trade Center.. If I had arrived minutes earlier, I would not be here talking to you at this very moment because I would have been in the building's elevator when the first plane hit the building!”

My conclusion is that, as my Mom would say, I am "truly blessed” to have had tardy friends and relatives!

For the record though, despite surviving the worst catastrophe in North American history committed on North American soil, the general fall- out resulted in a certain amount of alienation from friends Stateside.. An alienation which generally grows between those who have physically survived a holocaust and those who only experienced one in theory or by distance.

Those survivors in New York had to continue to work and breath in contaminated air. All had to work, in various ways, through posttraumatic stress disorders and a lingering and haunting fear that there had not yet been closure in the assault.

Nevertheless we all still live…except one friend who I lost three years ago to the long-term effects of having to continue to work at her office near Ground Zero.

She had been running late that day as well.