White Trash Europe or What The Hell Am I Doing In This Neighborhood? 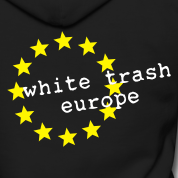 First let me emphasize the fact that I neither designed this Tee Shirt nor coined this phase. Nevertheless, it brings up the topic of why there are such troubling conditions and conflicts in the European Union.

For those of you who don’t know, the expression White Trash is an American English pejorative term referring to poor white people in the United States. It suggests lower social class and degraded living standards.

If you’re living in Europe, I think you can probably already see where I’m going with this!
I was a wide-eyed Green Horn, in the South of France, enjoying one of my first dinners chez des copains francophones, the first time I became involved in a discussion of the EU many, many years ago. To be more precise, it was sometime in the 80s.
The host and hostess and two other couples were French, the language of the dinner party was French but several other European countries were represented at the table: German, Italian, Danish, a French Swiss and then there was me…the lone American.
They explained to me how a United Europe would give them the kind of market base which would rival the US. That it would be a sort of “United States of Europe”.

Then I emphasized the fact the despite regional differences, and that although we didn’t actually have an official language, that we in the US spoke American English. They then informed me, with pride and enthusiasm, that the language of business and commerce would indeed be English.
A vague disturbance rumbled quietly among the diner guests when I asked which English they would be using in these business transactions.

No one ventured to tell me, on the other hand, which language would be that of diplomacy among their leaders.

When some said that a United Europe would protect them from “The Yellow Menace”, I wasn’t sure whether they were being sarcastic or actually being polite. Perhaps they meant someone or something else since there were no “yellows” sitting at the table.

My preference for life in France, I told them, had a lot to do with the fact that I found more compatibility with the Gallic way of life than of Germanic order and precision or the Spanish concept of time, Belgian randomness and uncertainty, or the dubious Italian sense of business etiquette.
When I expressed my enjoyment of the diversity and uniqueness of each national culture of Europe, I was told that a United Europe would prevent war among them in the future….or something like that anyway… if I remember correctly.
It was quite an enjoyable dinner, actually, despite the fact that I could see the seeds of familiar discord among the Europeans beginning to spout.

Nevertheless, they appeared to be unanimously excited by the prospect of all of Europe going into business together in order to better compete with the Yellow Menace…whatever that is… and the economic clout of the US.

Years later, after the EU became official, I was taking a business class here in the South of France. My French business professor explained how the high level of unemployment in France was causing apathy among job seekers to the point where many had simply given up searching for employment. The City of Nice, for instance , had become a proletariat town with new residents from all over crowding into the area seeking the promise of “the Good Life”…whatever that is…
She described in great detail how the general quality in life in France for the French was “en train de dégringoler (Going into the sewer…Caput! Fini! Bye bye!)

Then there is the issue of some snide members of the EU.
Let’s take Great Britain, for example.
How can The United Kingdom be a member in the EU when the English don’t even consider themselves in Europe “I’m visiting Europe this summer,” or “I’m moving to Europe,” they say.
Imagine the rationality around something like this: Great Britain is composed of four countries, England, Northern Ireland, Scotland and Wales.
England doesn’t even acknowledge the importance of the Euro as their unit of monetary exchange.

They might as well let Turkey in. Who knows whether they, too, are on the continent of Europe.

The English have always cracked me up with their wily ways.

Why does Europe seem to be teetering on the edge of an abyss? Perhaps this is what happens when a population reacts to concepts of color instead of the possible incompatibilities of various cultures.

It’s also when you tear down all the picket fences dividing the privacy and sanctity of ones’ neighbors’ property.

What the EU represents to me the is the joining of the hands of a polyglot confusion of economically unequal, white people, semi-white people and wanna- be white people for no reason at all.