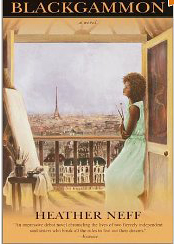 Blackgammon, by Heather Neff
Recently, I read a book review by a blogger who lives, as I do also, in the South of France. She gave me permission to share this review of the novel BLACKGAMMON by Heather Neff with the readers of my blog.

TWO FRIENDS AND A TALE OF TWO COUNTRIES: a book review

“Understand this, Michael : There’s no such thing as a sanctuary. “

Believe me when I say that the pessimistic opening line of this intriguing novel belies the apparent optimism of the writer’s vision. At least this is what I concluded after reading this story which chronicles friendship of two women from two different generations whose destinies were to work, live and try to love in Europe.

Michael…that’s right her name is Michael…lives in the academic environment of England, as professor of…predictably…African American literature with her husband a brilliant English scholar of ….you guessed it…African literature.

Cloe Emmnauel is a….. painter. Well, at least she not a Naomi Campbell clone or an aspiring chocolate Hemmingway squandering her days away playing with the green fairly in the squalor of bohemian Paris. I’ll get to those books later.

Nevertheless, the two women met by chance in an American museum. The older woman, planning to flee to Paris after a disastrous romance with an Black-Canadian immigrant (yes, you read that correctly) and the other a quasi-orphan with dreams of living abroad, meet, become fast friends and vowed to keep in touch.

They kept their vow throughout the novel through letters and occasional visits involving heart wrenching revelations..

Cloë the painter struggles with domestic violence issues from her past while trying to negotiate some equilibrium between her increasingly successful and demanding career and her challengingly peculiar love life. The cultural and ethnic dynamics of her personal relationships with the men in her life will definitely baffle any female reader who has lived abroad for any length of time, yet despite the implausibility of her mates you will probably gladly follow the story to its conclusion because of the vivid images of the cosmopolitan lifestyle of these two friends.


Black American women living abroad will obviously react to the relationship configurations of these two women with a certain degree of scepticism. More than a touch of mendacity and hints of multi-cultural treason prevail in this tragic-comic novel of the search for identity, love and, professional success.

The problem I find with novels written about American women abroad is that there is a stereotypical quality to the life choices of these women. It places limits on the perceptions of the black American experience abroad, which limits the kind of novels we can expect to be disseminated through the mainstream publishing industry.

Despite what probably feels like a negative review of Blackgammon, I actually thoroughly enjoyed it on many levels.


Next I will review, Andrea Lee’s LOST HEARTS IN ITALY
Foreigntonguesandchocolatetartes.wordpress.com
Be the first to comment