Is Immitation Truly Flattery? Or Not! 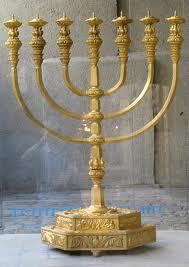 Menorah
Charles Caleb Colton (1782-1832) was an English cleric, author and art collector who was also well known for his eccentricities. The quote, “Immitation is the sincerest form of flattery,” has been attributed to this gentleman.

The menorah is described in the Bible as the seven-branched ancient lampstand made of gold and used in the portable sanctuary set up by Moses in the wilderness and later in the Temple in Jerusalem. Fresh olive oil of the purest quality was burned daily to light its lamps. The menorah has been a symbol of Judaism since ancient times

The kinara is the canndle holder used in Kwanzaa** celebrations in the United States. During the week-long celebration of Kwanzaa, seven candles are placed in the kinara - three red on the left, three green on the right, and a single black candle in the center. The word kinara is a Swahili word that means candle holder.

**Kwanzaa is a week long celebration held in the United States honoring universal African-American heritage and culture, observed from December 26 to January 1 each year. It features activities such as lighting a candle holder with seven candles and culminates in a feast and gift giving. It was created by Maulana Karenga and was first celebrated in 1966–1967.

If it were my idea to create a symbol for an “African American holiday”, for black Americans, I think something more appropriate would have been a structure involving chains (our arrival) and links (our survival). But then what do I know?

Nevertheless I say that sometimes imitation is simply theft!