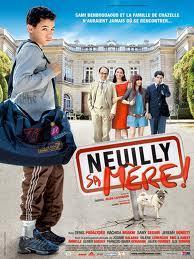 We tend to rent or buy our French movies because we find it rather penible to sit through a French movie in the theater. When one considers the various regional accents, dialects and all, I usually use the hearing impaired mode as well, to help me along.

Sometimes a French movie plot line vaguely echoes a popular American movie or television series. When this happens, it is an absolute guarantee that I will see the movie. I am never disappointed by the fact that there is always a wildly divergent approach to what on initial impact would seem a similar issue. One such movie is Agathe Clery, which most Americans could assume is a take on American filmmaker Melvin Van Peebles' Watermelon Man.

Another example of this Gallic wink towards American issues is the film I saw recently, Neuilly Sa Mère.

Years ago there was a popular television series, called Fresh Prince of Bel Air. Actor,Will Smith, starred as a teenager growing up in the "hood" of Philadelphia. After a scary gang rumble, his mother sends him off to live with his aunt and uncle who live in the wealthy town of Bel Air in California.

In Neuilly Sa Mère, adorable young actor, Samy Saghir, stars in this hilarious film about the pretentions and dysfunctions of the bourgeoisie...or the upper classes...I still have trouble with the distinctions, here in this Socialist country. After all, I'm from a Capitalist one, where the classes, these days are ironically rather...flou...in comparison.

Fourteen-year-old Sami, lives with his father and mother in a housing project in a working class and immigrant neighborhood in Chalon-sur-Saône in the Burgundy region of France. Unlike the American Fresh Prince, whose old neighborhood is ruled by gang violence, through Sammi's eyes, his "hood" is a vertitable multi-cultural and ethnic paradise...Kumbaya and such... you see.

His father drops dead of a heart attack as a result of over-identifying with and over-reacting to a Soccer game. His mother is forced to take a job on a boat, so she sends Sammi to her sister and husband who live in the affluent Paris suburb of Neuilly.

Oh, by the way, Sami and his family are Beur...North African Moslims.

I'm not quite clear whether both Sammi's aunt and uncle are both Beur or in an intercultural/ racial marriage. Perhaps I missed it in my translation, since it is obvious that his aunt is North African, but his uncle, you see, is a Pork distributor.

The most amusing aspect of this tale, when I compare it to The Fresh Prince, is that while Will Smith's character arrogantly flaunts his ghetto savvy and lords over the naive, marerialistic and self-centered members of his extended family, Sammi encounters bullys and thugs of proportions previously unimaginable in the exclusive enclave of some of France's future leaders. His young cousin,Charles, with whom he must share a bedroom, is Right Wing, has political ambions and aspires to become President of the Republic.

If you should choose to accept the challenge of watching French political satire, I'm sure you'll agree that the political references in this story are not exactly all that nuanced. Even an Anglophone foreigner like myself would get the joke...I mean...message.

It'll make you look up the backgrounds of our 2012 Presidential candidates, which is never...ever a bad idea.

This is why I read "Dreams From My Father" before I decided to cast my vote for President Obama.

No surprises. No regrets.