MIXED NUTS AND SUCH 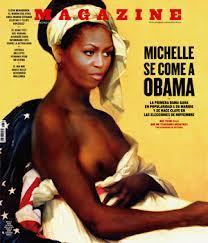 Just as I recovered from the shock art event in Sweden created by artist Makode Linde...

Yup. That's right...it is a portrait of First Lady of the US, Michele Obama in a rendition of the painting by French neo-classical painter, Marie-Guillemine Benoiste, which was titled Portrait d'une Négresse;

Karine Percheron Daniels is the author of this modern day interpretation of a "Négresse."

According to the magazine's editor, the picture is meant to honor Michelle Obama who they call the "gran mujer" (great woman) who "conquered the heart" of the man who would be president and "seduced the American people."

Anyway, my assessment of the Afro-Swedish artist's event took many turns. I finally arrived at the possibility that the young artist, who is most likely mixed race , was working out some issues regarding Africa's relationship with Sweden, especially since he chose a Swedish participant to 'cut the cake"...as it were.

Now, as for Ms. Percheron-Daniel's painting and her intention, I was quite perplexed until I searched for the artist's bio and found this:

"Karine Percheron-Daniels was born in the French Alpes in 1970 from an English mother and French father. She lives now lives in England."

It's all just a case of simple genetics.

Here is what the artist had to say about her painting of First Lady Michele Obama:

"If any of you have found this piece of art insulting I would like to say that my GENUINE intention was never to shock or upset anyone.This has COMPLETELY got lost in translation I created this picture as part of a series of other famous nudes As an artist I only paint and create pictures of people I admire and feel passionate about Michelle Obama is one of these people.

I am not a racist . With my art I try and show beauty NOT DIRT."

Well...there you are!
Have great day.